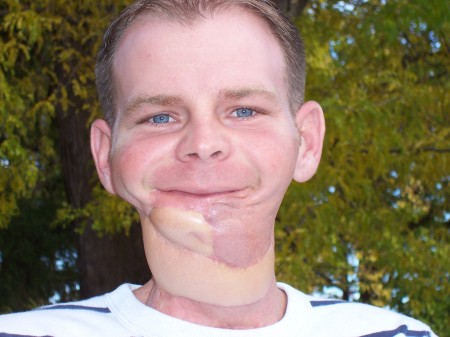 Last fall, oral cancer survivor Gruen Von Behrens visited most of the Butler County schools and Slippery Rock University to share his story.  Gruen began using chewing tobacco at age 13 and had developed oral cancer by age 17.  His baseball scholarships and career plans had to be shelved.  His relatives and friends had to watch him suffer through multiple, disfiguring surgeries. Now, in his mid-30’s, Gruen travels the country to tell his story and encourage youngsters to avoid tobacco use, be kind to their school mates, and value their families.  When people defend tobacco use saying “it’s not like I’m hurting anyone else” he points to his scarred face and recounts the pain in his mother’s eyes as she watched him endure countless surgeries and medical treatments.

Knoch Middle School Assistant Middle School Principal Richard Cavett said that they were “thrilled to have Gruen speak to the students.”  As a result of the impact, tobacco education featuring Gruen’s story has been integrated into their eighth grade classes.  At Seneca Valley Intermediate High School, Gruen received a standing ovation after riveting the audience with his energetic story telling approach.

Cuts in Pennsylvania’s tobacco funding, and limits on the types of projects which can be offered will likely result in that appearance being Gruen’s last visit to our area.  However you may have seen Gruen featured on a May episode of the hit television show “The Doctors” when a wife asks for help to convince her husband to stop using spit tobacco.

If you or someone you know would like to have help quitting tobacco use, please visit Keystone Wellness Programs.